The skin produces steroids by itself

It has been revealed that the skin (keratinocytes) itself has an ability of producing steroids. It is a proved fact.

The skin becomes thin by continuous application of steroids, temporarily hypertrophic (thicker than normal) after withdrawal and normalized after a significant period.
The consecutive changes can be explained as follows from the thinking of cortisol production by the skin. It is not proved yet. It is my hypothesis but it can explain various phenomena about TSA.

Topical steroids make the epidermis thin by suppressing the proliferation and differentiation of the keratinocytes. 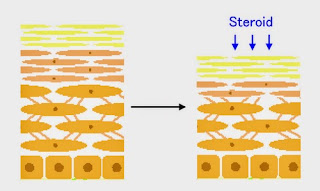 Physiologically, the epidermis produces steroids. The produced (inner) steroids regulate the proliferation and differentiation of the skin. However, prolonged application of topical steroids may suppress the production of the inner steroids. It is just like adrenal grand is suppressed by systemic steroids administration. 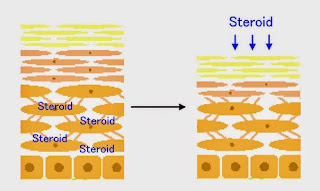 When topical steroids were withdrawn and the inner steroids can’t be produced immediately, the epidermis becomes thickened and poorly differentiated. At that period skin can’t work as a normal organ and may react to various stimuli. 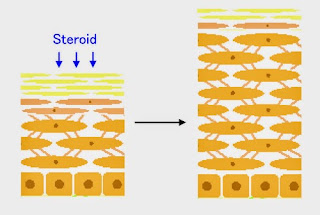 After a significant time has passed, the skin recovers its function to produce inner steroids. That is the story of TSW from the viewpoint of steroid production by the skin itself. 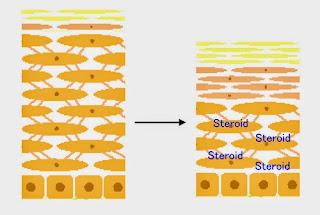 From the above theory, many phenomena can be explained in an integrated way.

The so called “moisturizer withdrawal therapy” is another example. The epidermis is proved to produce more cortisol in the dry atmosphere by the experiment using cultured keratinocytes(→ ref.). When the procedure of TSW prolongs and the redness of the skin continues, withdrawal from the whole topical agents sometimes works though it is accompanied by another rebound just like withdrawal from steroids. The mechanism may be the facilitation of recovery of production of inner steroids.

Cholesterol is the primary material of all steroids. It is converted by the enzyme CYP11A1 to pregnenolone. On the other hand, CPY11A1 is an enzyme to metabolize aromatic carbonates which are contained in Coal Tar. Coal Tar has been known to be useful to make eczema subside since the time before topical steroids were on the market. If aromatic carbonates in the coal tar induce expression of CPY11A1, cortisol production in the skin is also accelerated. Vitamin D is also known to be metabolized by CPY11A1 (→ ref.) and there is medical literature topical Vitamin D works on eczema (→ ref.) . It may be of the same reason.

Nowadays it is revealed that there are three organs which produce steroids, i.e. adrenal grand, brain and skin. The fact was elucidated only several years ago and it might not be well known to the ordinary people. The skin also produces sex hormone also. That is why women’s skin changes according to their periods.

There are patients who used topical steroids so long a time and the epidermis seems not to produce any more steroids eternally.  I believe there are no patients who can’t recover the inner production of cortisol within the skin but you can choose the method of supplying steroids as much as needed by topical agents.

It is so much for today. I hope your itching disappeared or decreased for a little time by reading my article
I know you sufferers through TSW are spending a severe time day by day. But there is an exit because your skin is living and struggling to reconstruct the balance for recovery.

PS: Suppliment for Brenda Chu.
Cortisol synthesis pathway is in the following figure.
Cortisol is made from cholesterol via pregnenolone by the enzymes of CYP11A1, CYP17, 3βHSD, CYP21 and CYP11B1. Progesterone is on another pathway and doesn’t convert to cortisol.
I suppose any agent which induces expression of CYP11A1, CYP17, 3βHSD, CYP21 or CYP11B1 can be a facilitator of TSW. The examples are coal tar and topical Vitamin D above mentioned. 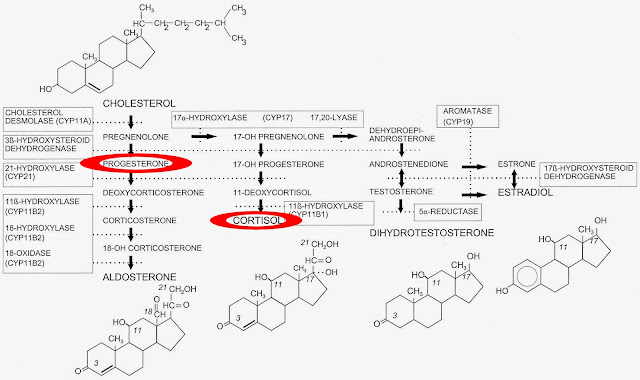 Please click here as for the clofibrate ointment. It is a non-steroidal agent with mild anti-inflammatory effect.
投稿者 Unknown 時刻: 18:38

Comments will appear after approval. Please wait for a while.

Click the image and move to the online shop